UPDATE: 5/1/2014 – After four months AWOL, I have reactivated my FB account. Why? Because it is the only practical way for me to stay in the loop with many people who are important to me. And you know who you are. But to avoid becoming sucked into the FB wormhole again, I have turned off all notifications and will only sign on one day a week. Let’s call it Facebook Friday. Aloha.

Facebook Hasn’t Even Begun To Exploit Everything It Knows About You.

Click on the above link to read this article. It’s not long. (Much shorter than this post!) But here’s how it ends:

Facebook’s most ambitious plans of all could be in the realm of voice recognition, or training computers to understand what we say. “I’m looking forward to us doing a lot more here,” Zuckerberg noted cryptically in the investor call.

This technology could transform Facebook from a passive receptacle for our memories to an active transcriber of our everyday interactions. Zuckerberg’s reference to voice recognition calls to mind a 2012 interview with Facebook’s then-vice president of advertising, Andrew Bosworth. Bosworth explained that Facebook could one day use a phone’s microphone to pick up the sound of music or a person humming — then deliver ads for concerts, media or content.

The NSA has hollowed out the Moon and is warehousing every email, text, phone conversation and smoke signal. Why? “To keep us safe.” (Pay no attention to the Chechen stoners blowing up the finish line of the Boston Marathon… or every school and mall shooting. Can’t stop ’em all, right?)

And who spies on the NSA? The Facebook-Apple-Google-Groupon-Yahoo. Better not shorten that to “FAGGY” – my people already have enough PR issues. When we’re not stealing rainbows and forcing marriage equality down the god-fearin’ throats, we are controlling hemlines, dominating figure skating, creating ever more stunning floral arrangements and cornering the market in awards show emcees. (But that’s another post.)

Bottom line? You have no privacy. Resistance is futile. Acceptance or denial are the only two options available to rational people.

I’ve thrown my lot in with the acceptance crowd. I sprinkle “hellos” and disclaimers into my phone chats and emails to let NSA know that I know that they know. You know? For example, I may occasionally say or write, I wish the earth would open and swallow up that horrid screech owl Marsha Blackburn (R-TN) who is a lying sack of shit. And then I’ll quickly add, I am, of course, speaking metaphorically here, and have no intention of actually causing the earth to open. Try it. It feels good. I’m talking to you, Angela Merkel.

And then, there’s the social media. Or as I like to think of it: the social Medea. Look directly at it and it can turn you to stone. There’s nothing nefarious going on there. It’s just business. What’s more American than business? But they’ve got a problem. These companies have spent billions in venture capital to build extraordinary flying machines that can take us anywhere. But they haven’t really figured out how to charge us for the trip. In fact, they’ve mostly decided NOT to make us pay for anything. Not with cash money. We are all far richer in another currency they covet: our personal information, interests, our desires and patterns of online behavior. They can gather that up, slice it, dice it, dry it, powder it and sell it like a crack pusher to the addicts: advertisers. 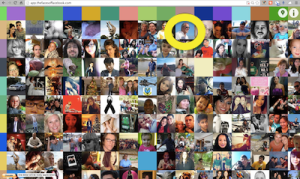 OK, so Facebook has amassed this giant pile of people who are sharing every blessed detail of their lives, all day every day. What to do next? Go public! So they did. And they didn’t have to try very hard to sell the IPO shares. Until the next day, when people really started to scratch their heads and wonder what they had bought. How will FB ever make money?

The answer, of course, is any way they can. In the last 18 months, the FB elves have been working on all sorts of ideas and schemes for monetizing their product – aka, every detail of our personal lives. Which we freely give to them. Along with our permission to use our ‘stuff’ any way they want.

It’s annoying, right? The ads that pop up in your news feed. The “suggested” ads that show up in your friend’s news feeds with your name attached. Be careful out there. When you LIKE a page, you suddenly become the (unpaid) spokesperson for that thing you liked. I routinely click on the opt-out of those advertisers. When they ask why, I click the radio button for “Offensive”. But it gets so tiring.

Now, though, Emperor Zuckerberg of Facebookia has revealed how far he wants to take this. FB will learn how to use your device’s microphone to listen to your life. If it hears a song playing on your car radio, it will prompt you to buy the song. What if it can discern that you are a really bad singer? Will you start getting Groupon deals on voice lessons? Or will you be invited to audition for America’s Schadenfreude Sing-A-Long?

A little creepy, but harmful? OK. What does FB do with the audio evidence of the affair you’re having with your boss… your minister… your nanny… your sister-in-law…? Hair on fire yet? Drop and roll. It gets worse. You know what else your devices have? A camera. Maybe two. (It’s why I keep a hat handy, in case someone wants to skype with me.) Talk about monetizing information! Jackpot! Yeah, it’s extortion. But whatcha gonna do about it? You’ve already told FB who your friends and family are, your employer, your church, your book club… face it: you’re screwed.

Maybe all they’ll do with your shame is give you the option of paying $50/year, or /month, or /day? to regain control of your mic and camera. You spend more than that on lattes and breath mints. Or, FB could buy a few internet ‘security’ companies and start offering you intrusion-defeating software. Maybe they’ll start an insurance company that offers ‘privacy policies’ for the low low premium of $250/month. If your reputation / marriage / career get ruined by a social media slip up, the policy will set you up financially to relocate and establish a new identity. The federal government, natch, would make this part of every Congressman’s benefits package.

My point – and even I have almost forgotten what it was… (NSA, a little help?) Oh, right. My point is that we cannot fight ’em. But we can un-join ’em. Sort of. I’ve decided that I’ll pull the plug on FB on 1/1/2014. I’ll probably not cancel my account outright, at least not right away. But I’ll turn off all notifications and cut all the lines of connection between FB and me. I’ve already downloaded my FB “archive” which captures my 5 years of posts, rants, photos, friends, etc. Took about 10 minutes and it results in a surprisingly small file. Almost disappointingly small, truth be told.

But, but… where will iGo? Lots of places. 1. This blog. 2. Twitter. 3. Instagram. 4. Skype. Gmail. YouTube. Sulia. Huffpo. Et cetera. Yes, I know what you’re thinking. These are all part of the NSA-Googleplex! FB owns IG! MSFT owns Skype! Google owns Gmail and YouTube! you idiot Steve!! Yeah, yeah. I’m not a Luddite! I’ll reconsider various apps as they decide to sell pieces of my soul for their own profit. I’m not trading FB for G+. I choose to have a G+ account because it makes for a seamless experience in the Googleverse. Like moving around Europe as a member of the EU. It’s easy. That’s worth something to me. And that’s the point.

One immediate benefit (for me, at least) is that I’ll spend more time here at my Pulitzer Prize worthy blog – The End (so far) – instead of getting constantly drawn into political discussions with nameless, faceless, brainless friends-of-friends-of-friends. Maybe I’ll finally write the screenplay that gets made as a film that wins awards and gets pirated on the internet… now that would be a gratifying bit of internet abuse.

Here’s a prediction. FB didn’t exist a few years ago. It could easily not exist a few years from now. (No names – cough – MySpace – cough – Blackberry – cough cough – MIcrosoft (–too soon?) I think the model that may work in the end is along the lines of Google’s AdSense and YouTube channel monetization. Revenue sharing. I mean, every time I buy groceries (wine) at the supermarket I get savings on items I buy often (vodka), and I rack up points for 20c/gal off gas (which we never use because Thom likes to play the cheapest-gas game). But I’m getting compensated – microcompensated – for each transaction. Safeway and Chevron are buying my loyalty. Or renting it. Frequent flyer miles, same thing. You fly 500,000 miles on AirSchmair and you get to stand on shorter lines and board first so you can sip wine from real glasses and make occasional eye contact with the Great Unwashed as they shuffle by you on their  way to coach. Customer loyalty programs are ubiquitous – except in social media. How about it, FB? Instead of giving me the ‘opportunity’ to buy a friend a birthday gift (real or iMaginary)… why don’t they reward their members for behaviors that are profitable for FB? Put 1/10th of a penny in my FBank every time I click on an ad, or respond to a poll, or send a Starbucks gift card, or LIKE an advertiser. If Hilton wants to use my amazing vacation Instagrams in a promotion, let them buy the rights, or pay me for fair use for however many impressions. Share the revenue, FB et al, and everyone wins. Or loses less? Or leaves you less frequently?

Comments welcomed! But if you’re going to tell me I’m a moron, I require payment per insult: tell me one thing you don’t like about social media.