If you’re an American of a certain age, you will fondly recall The Jetsons – a tv cartoon from the 1960s about a typical family set in the future. Count yourself among the blessed if the theme song started playing in your head as soon as I named the show.

Many of the futuristic inventions and gizmos portrayed in this series (set in the year 2062) have actually become part of our own everyday existence 50 years ahead of schedule. The treadmill, robot vacuum cleaners, holograms. Fortunately, flying cars are still in the future, but maybe not too far off. I’m just not in a big hurry for flying cars, you know what I mean?

The one invention that I’m thrilled made it from The Jetsons to the real world in time for me to enjoy is the videophone. Skype, FaceTime, Google and Facebook have their own versions. They all do the same thing: allow two (or more) people to see each other while having a conversation. We just take it for granted now. “Skype me tomorrow.” It doesn’t matter where on earth you are. It costs nothing, which is remarkable. We still have to pay for international calls on our mobile phones. But we can skype or facetime with our far-flung compadres using those same devices, gratis. As long as you’ve got an internet connection and a camera- 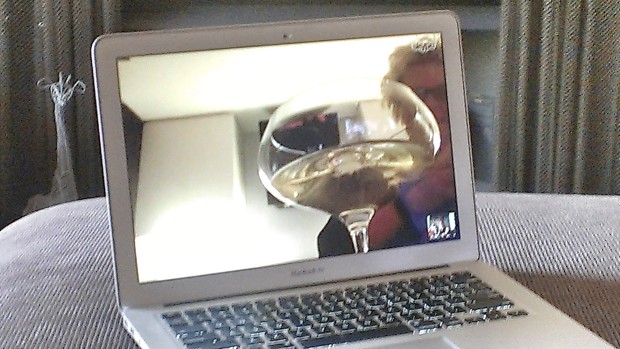 enabled computer, tablet or phone – you’re good to go. And the bigger the screen, the better the experience.

I have to admit, though: I don’t take this for granted at all. (That may be obvious with this post.) I still marvel at it. And I’ve been skyping with friends all over the world for years now. As broadband capacity has amped up, the connections are crisp and clear. It really is the next best thing to being there. In fact, it’s a great way to meet for cocktails, say, between LA and London. I chatted with M in New Jersey today, P in Brisbane tonight. And I’ve just connected with my old friend L, who splits her time between Beijing and Hong Kong. It’s been too long since we’ve seen each other, but we’ve got a skype date soon. Amazing.