When a dog is found or rescued, he may have a name that no one knows. Or, he may have been given a name at a shelter or a rescue organization that isn’t really his name and so he doesn’t know it. In 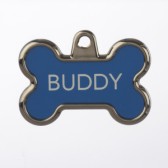 any event, when you foster a dog, you pretty much go with whatever name is attached to the him at that point. You’re a temporary guardian, and his forever family is likely to give their new dog a new name.

Like Tiger (who appeared in an earlier post), we rescued Bernardo from the elderly animal “hoarder” in Compton. In fact, Bernardo & Tiger came to us as fosters on the same day, back in December 2012. They joined Charlie, our first ‘refugee’ from the hoarder, who had melted our hearts in a hurry – but Charlie will have his own post.

Whereas Tiger is a feisty little Chihuahua-Dachshund mix who was hopping into our laps in no time, Bernardo was much more apprehensive. His nerves would have to be calmed, and his trust earned. I doubt he was ever called Bernardo by anyone. But when we figured out that he is a mix of Italian Greyhound and (maybe) Boxer, that name seemed to fit him a little more snugly. When we decided to keep him, we kept the name, too.

We’ll never know what situations our rescues came from, good or bad. The hoarder didn’t mistreat the animals she had – 40 dogs and 60 cats, give or take. In fact, she had them all spayed / neutered, vaccinated and they were well nourished. But we also don’t know where they were before she claimed them. None had any identification or microchips. Bernardo remained tentative and unsure of the world for quite some time. But like Charlie did before him, Bernardo made us foster failures soon after we had him with us. There is something so special about winning a frightened animal’s trust and watching him slowly, slowly relax into the feeling of being… home. It forms a powerful bond. Love really is the cure. 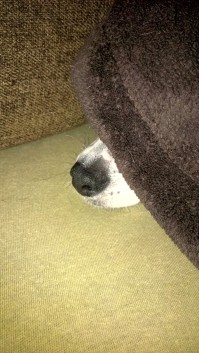 These three boys get along very well. It’s natural to think that they knew each other at the hoarder’s, but it was a pretty crowded place, and so who knows? Of the three, Bernardo has been a bit of a loner. He is naturally very lean and so he gets cold more easily. If there’s a sunbeam coming through a window or on our little terrace, that’s where you’ll find “B” (the shortcut I find myself saying more and more). Or, look for the lump under a throw on the sofa or a blanket on the bed – that’s his next favorite spot. (He’ll poke out his nose to keep tabs on what’s going on outside of his blanketed cocoon.) Oh, and warm clothes out of the dryer? Fuggedaboutit! Heaven.

I think he must have hung out mostly with the cats. Maybe he was even raised by a mamacat. Because Bernardo has the most feline behaviors I’ve ever seen a dog exhibit! He rubs against things and people… arches his back as he walks under your legs… and makes this very undogly sound, it’s a happy mewling noise. He also curls up with his front paws curled under him. That’s a cat thing, isn’t it?

Anyway, dog-cat or cat-dog, Bernardo is a joy. At one point, I don’t know when exactly, I noticed he had started wagging his tail. He has learned how to play, with his brothers and with us. And he’s really kind of a lady’s man; B gets smitten. Aunt Mandy, Aunt Janice, Aunt Brooke and Aunt Maria can attest to that. Tail-wagging and playing and letting strangers “in” are three very good signs of a happy dog. He still has absolutely no idea whatsoever what to do with a tennis ball. But that’s OK. Neither do I.