It would be impossible to overstate the peril faced by gay folks as the 80s dawned in America. Harvey Milk had been assassinated just two years earlier. Ronald Reagan was sworn in as president. Gay men in New York and California were suddenly getting rare cancers and dying, no one knew why. And it is fair to say that no one much cared. Jerry Falwell and his Christianist hatemongers called the epidemic “God’s wrath”. Reagan would not even say the word “AIDS” until seven years into his presidency – while tens of thousands of Americans died. There was talk of quarantining – or even tattooing – people with AIDS.

Sorry for the gloom, but it’s important to set the context for what happened next. (After all, this is ancient history for some who will read this.)

I referenced “gay folks” above; not the “gay community” or the now-ubiquitous (necessary and dreadful) “LGBT”. That’s because we hadn’t yet coalesced into a single community; and the all-purpose acronym was still years away. The Ls and the Gs were off doing their own things in their own zip codes. The Bs were busy doing, well, everyone. The Ts had Renée Richards going for them, but not much else. Though much had changed in the decade since Stonewall, queer life was still Balkanized.

So, when gay men started getting terrible infections, diseases, cancers and dying in rapidly increasing numbers… When governments and gods showed themselves to be untroubled by our immense human suffering and the horrifying death toll… a community was born.

We Were Here is a powerful, heartbreaking, uplifting testament to the response of the nascent gay community (and its allies) to the public health crisis of AIDS in San Francisco. The history is told through on-camera interviews with five people who recall the love, the loss, the victories – and the irresistible force of a community that is fighting for its life. This film is available via Netflix and Amazon. Click on this image to link to the We Were Here website where you can stream a rental for $3.99.

Who should see this film (which was released in 2011)? Everyone. But especially all the good people who want to stop the gun insanity death toll in this country. All those “Moms” and “Mayors” who give tv interviews… who fill our inboxes with petitions to sign and emails asking for money so they can do… more petitions? There have been 30+ school shootings since Newtown. Another 10,000+ gun homicides. Do you think you’re working hard enough? You haven’t even started.

If that makes you angry, good! You should be angry. You can’t even send your kids off to school in the morning, or to the mall in the afternoon, or to a movie in the evening, without wondering if they’ll be next. So get angry! And channel that anger into real, direct action. You say “there are 80 million Moms in America!” Really? I don’t think I’ve seen 80 women (or men) gathered anywhere, doing anything, since Newtown. Have you?

As the first anniversary of the Newtown massacre came and went, I heard a tv discussion about our failure to achieve gun control in this country. Someone suggested that if you want gun control, then look at how the gays fought for marriage equality and equal rights. It’s not a bad idea.

Gun control is (still) way more popular than gay rights. But we have marched in the streets, raised money, campaigned for like-minded politicians and relentlessly lobbied lawmakers, filed lawsuits, rallied voters, discussed it in polite (and not so polite) company.  We have done this for years, without losing our nerve or our hope. We have kept up the pressure, we have fought ignorance with intellect, cowardice with courage. And we are finally turning the tide. It’s been some time since we lost a battle, and we’re well on our way to winning the war.

I don’t mean to single out the Moms Against Guns. Every liberal/ progressive political goal would be more quickly achieved if leaders stopped the absurd flood of online petitions and solicitations… and challenged their millions of supporters to take direct action. Sometimes, I wonder if the Koch brothers aren’t secretly funding Credo and Move On – to sap any real initiative by giving people a false sense of having done something every time they click the “Sign the Petition” button. That is not participatory democracy. Make some noise! Hit the streets! Act up! Fight back! Not in dribs and drabs, but by the hundreds, by the thousands, by the millions.

If I received an email from the “Moms” asking me to join a gun control march in my city next weekend, I’d drop everything to be there.  But more than a year after Newtown, I still haven’t got that email. And that’s my point. 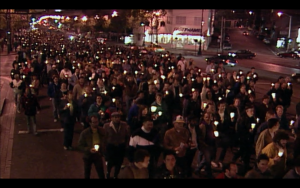 Whether you want to raise the minimum wage, or guarantee voting rights, or protect a woman’s right to control her own body, or reform immigration, or tax the rich and the corporations, etc… Nothing succeeds like excess. Remember ACT-UP? When FDA was taking forever to approve new AIDS drugs, these creative and in-your-face protests drew lavish media attention and focused political pressure like a laser beam. They weren’t afraid to be angry. People were dying. The “die-ins” stopped traffic. The barricade crashing made people uncomfortable. But new drugs and treatments went from a trickle to a fire

hose, and many lives were saved.

We gays had to fight for our lives in this country. And as a community of activists, we won. But 650,000 people have lost their lives to AIDS in America since 1980. That is eerily similar to the number of gun deaths during that time. And always, always:  silence = death.

After you’ve had to fight for survival, it’s relatively easy to move on to battle bigotry and ignorance (DADT, DOMA, ENDA, the GOP, the teabaggers and the faith-hurling wackos)… You just have to be alive to do it.

Here we are in 2014, an election year. The entire House and 1/3 of the Senate are up for grabs. Plus many governorships and legislatures and ballot measures. The media will declare the elections ‘over’ before they even begin. Gerrymandering! Voter apathy! The parties are all the same! Voter suppression! Oh look – it’s Justin Bieber! 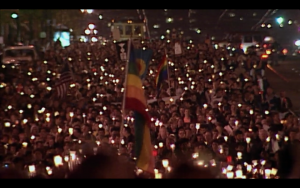 Set the world on fire!

It doesn’t have to be that way. Get yourself registered and then help someone else register. (Click on Blog the Vote below.) Think of it as multiplying your vote. Volunteer to GOTV (Get Out The Vote) during early voting and on Election Day in November. Drive someone to the polls. Or offer to babysit. Have a mail-in ballot party. Because the fact is, without an enormous and sustained effort, less than half of the eligible voters in this “great democracy” will bother to cast a vote in November. But that sad fact presents an opportunity. We flip 20 House seats, we take back control of Congress and… a lot of life-saving laws and policies get done in Obama’s last two years in office. If not, we keep fighting like hell. Until we win.

Unless there is something more important you have to do?

Welcome to my therapy.