Yesterday, I watched the second half of the World Cup match between USA and Germany. And I realized that it was the first time in my life that I was watching soccer on television. Or off television, for that matter. Now, I’ve seen clips of highlights from big games over the years. I very likely even kicked around a soccer ball in grade school. But I’d never really focused on the game for an hour, paying attention to the players and the strategies and the progress of play. It was fascinating. And exciting! And in the end, the American team lost to the Germans – but they both advanced to the next round because they had better records than the other teams in their group blah blah blah it gets a little hazy from there…

FIFA, the international football league, holds a world championship called the World Cup. And that’s appropriate, since every nation on earth fields a team to compete. Every nation? I dunno. But certainly most. 204 teams began competing last year for the 32 tickets to play for glory in Brazil 2014. (USA is now through to the round of 16, which is remarkable, because no one gave them a snowball’s chance in hell of getting that far. Bravo.)

It got me thinking about American Football. Like FIFA, the NFL culminates its season each year in a ‘world championship’ called the Super Bowl. Of course, American Football is played in exactly ONE country on earth: America. (NFL likes to hold pre-season ‘exhibition’ games in places like London and South Korea… but it’s always two American teams playing each other in those “soccer” stadiums.)

Now, I know I will be branded a traitor or a communist or a terrorist or all of the above for saying this, but it became obvious to me as I watched soccer – world football – being played that American football would bore the rest of the planet to tears. 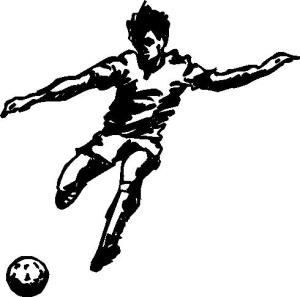 No, it’s true. It really is. Soccer is pretty much 90 minutes of the sport actually being played: running, kicking, jumping, heading, shooting, missing, scoring… when there are fouls they are called and the free throw or kick is taken and the game just continues… there are almost no interruptions… substitutions just happen… the clock never stops. If something happens to delay play (like some idiot running on to the field), then a few minutes are added at the end. So they play and they play and they play and someone wins, or there is a tie. And that’s OK too. Can you imagine an NFL game ending in a tie? Americans don’t understand that. It is about whether you win or lose… not about how you played the game.

Imagine trying to explain American football to one of the 7 billion non-Americans on the planet. Giant mounds of flesh and bone are encased in military-grade gear and are paid millions of dollars to mostly run into each other. Occasionally a nimbler version will escape the mob and run part or all of the way down the field to score. Sometimes the guy who throws the ball will throw the ball, and sometimes the mound of flesh he throws it to will catch it. When that happens, he will almost instantly be buried under many mounds of opposing flesh. Progress is measured in yards or feet or inches. There are 100 different fouls which will cause whistles to be blown and little flags to be thrown. The clock get stopped and whenever anything happens.

American football’s four 15-minute periods can take three hours to complete. Not counting the multimedia halftime extravaganza. Very often, the last 10 seconds ‘on the clock’ can be stretched out to 15 minutes of delays and kicks and thisses and thats. And then the lawyers get involved.

Also – and this really must be said – soccer players all look like athletes, lean and toned and able to run around for 90 minutes almost without stopping. They wear shorts and cotton jerseys. No padding. No helmets. No face cages. No suits of armor. And it can get rough from time to time, but they all seem to know that they are there to move the ball down the field and score – not to commit televised manslaughter.

Oh, and there is no instant replay in soccer. Shit happens. Officials call it. Play continues. No tantrums. No crybabies.

I’m sorry, America. Maybe I’m biased. After all, I live in a city that has a professional soccer team – the LA Galaxy – but no NFL football team. And I’m OK with that. In fact, I’d rather see tax money spent on schools and roads and health care rather than on a glistening new stadium gifted to some billionaire team owner. I don’t even know where the Galaxy play. Just sayin’…

There you have it. If I got it all wrong about football – American or otherwise – please be sure to sack me (or flash a yellow card) in the comments. In the meantime, I’m rooting for Team USA in the World Cup. Maybe this soccer thing will catch on?