The National Football League is the biggest, baddest sports league in America. Everything about the NFL is over-the-top. Teams of massive, muscle-bound multi-millionaires clash on billion-dollar battlefields, annihilating each other until only two armies are left standing. And then, Armageddon. The ultimate battle for WORLD* SUPREMACY. The Super Bowl.

* If you live in any of the other 195 countries (out of 196) where American football is not played, please forgive the slight exaggeration. You know how we are.

Baseball may be our national pastime, but football is the last redoubt of hyper-masculinity in USA! USA! If you’re not familiar with American sport (as the rest of the world – plus Mitt Romney – clips it), the ultimate primer on baseball vs football was given to us by the great George Carlin:

So, it was big news today when an NFL team drafted its first openly gay player. Michael Sam was a star player for the University of Missouri Tigers. He came out to his teammates at the start of his senior year season in 2013. They took the news in stride, the Mizzou Tigers went on to win the 2014 Cotton Bowl and Michael Sam was named a Defensive Player of the Year. 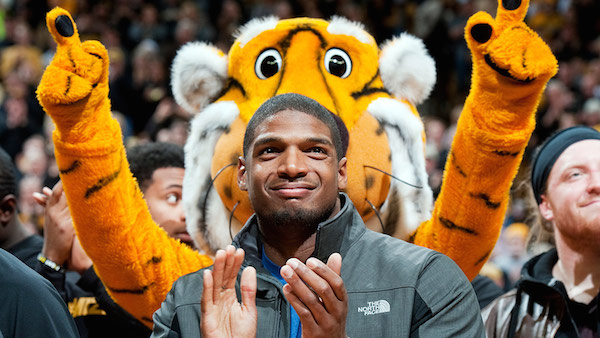 Then in February, he came out to the rest of the world, taking a huge risk with his anticipated career in the NFL – which has never had, and certainly never drafted, an openly gay player. A handful of cowards anonymously expressed some negative comments, but the response from the NFL, its teams, players and fans was overwhelmingly positive and supportive. When the “god hates fags” pestilence descended on Missouri’s celebration of its Cotton Bowl win, a thousand students lined the roadway with signs of support and t-shirts that read “STAND WITH SAM” to shield Michael from the haters. The hashtag #standwithsam trended for @mikesamfootball. 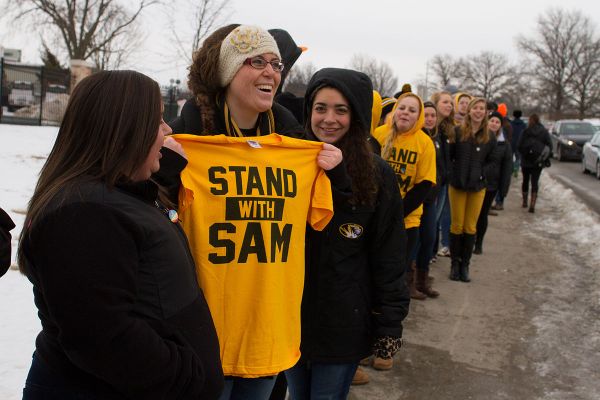 The St Louis Rams drafted Mike Sam today, and there’s a certain symmetry to that. It means he’ll have a built-in fan base in Missouri cheering him on. Congrats to Mike Sam, the Rams and the NFL. Everyone wins.

That news alone would make May 10th a banner day for the gay. But wait – there’s more. The state just south of Missouri (by pure coincidence) is Arkansas. In an America divided into conservative “red” and progressive “blue” states, Arkansas runs blood red in the former (-ish) Confederacy of the American South. It is the buckle of the “Bible belt”. Got the picture?

Well, imagine the surprise yesterday when an Arkansas judge ruled that his state’s ban on same-sex marriage violates the Constitution. BOOM! And he didn’t stay his ruling (in spite of the likely appeal), which meant that county clerks began issuing marriage licenses today to gay couples. First in line: Kristin Seaton and Jennifer Rambo received their marriage license and wasted no time at all. They married in an impromptu ceremony on the sidewalk outside the courthouse in Eureka Springs, Arkansas. 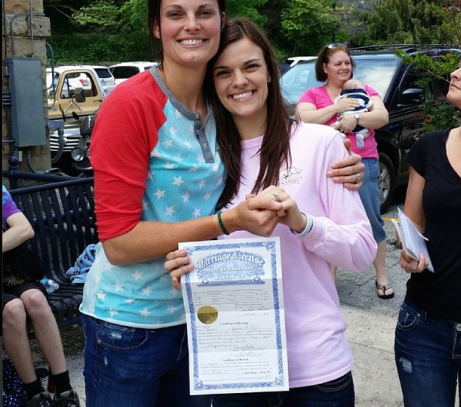 Congratulations to Kristen & Jennifer! And to Michael Sam – and his boyfriend (who probably also made history today as the first gay liplock on ESPN? Trey Wingo – can you confirm this stat?)

So, 10 May 2014. Big day all around. You know, this country often takes two steps forward and one step back. Sometimes we take one step forward and two steps back. But in the end, what we remember… what history records… what defines us… are the steps forward.

P.S. Meanwhile, over in Europe…