Later this month, a new documentary gives us the insider view of the 2012 Romney campaign. Netflix has been promoting “Mitt” with a clip from Election Night. It shows the Romney family in their Boston hotel suite, slack-jawed in stunned disbelief as they watch President Obama cruise to re-election. Mitt & Co. were (somehow) blindsided by the loss. For those of us who know we dodged a asteroid that day, this flick promises to dish up heaping servings of delicious schadenfreude. Butter on your popcorn?

It is generally accepted that Romney ran one of the worst presidential campaigns in memory. His clumsy mimicry of human behavior and idiom was simply unconvincing. But he had a lot of help from his lunatic primary opponents – better known as ‘the clown car’ – and, of course, there’s the Republican Party’s acidic base.

The GOP wasted no time in getting down to some very public soul searching following their election disaster. (Which does beg the question: Where do people without souls go to do soul searching?) Democrats, after all, kept the White House and the Senate – and gained seats in both houses. What went wrong? They commissioned “an autopsy” (their own words) to discover the cause of death.

Last March, the autopsy findings were released. The RNC gave the postmortem a rather upbeat title. “The Growth and Opportunity Project” (get it? G.O.P.) ran to 100 pages, and identified the constituencies they would have to attract if they wanted to win elections going forward.

Republicans found they were in good shape with older, white, heterosexual, Christian men. Everyone else… not so much. The autopsy revealed “opportunities” for the GOP to work harder for the votes of women, Latinos, African-Americans, the LGBT community and the “under 30” crowd.

OK, good plan, off you go… but then, a funny thing happened on the way to the next election. The Republican Party seems to have declared 2013 to be opposite year. At the federal and (red) state levels, Republican politicians pursued policies and enacted laws that can only be described as hostile to the very groups they were supposed to be wooing. Huh? 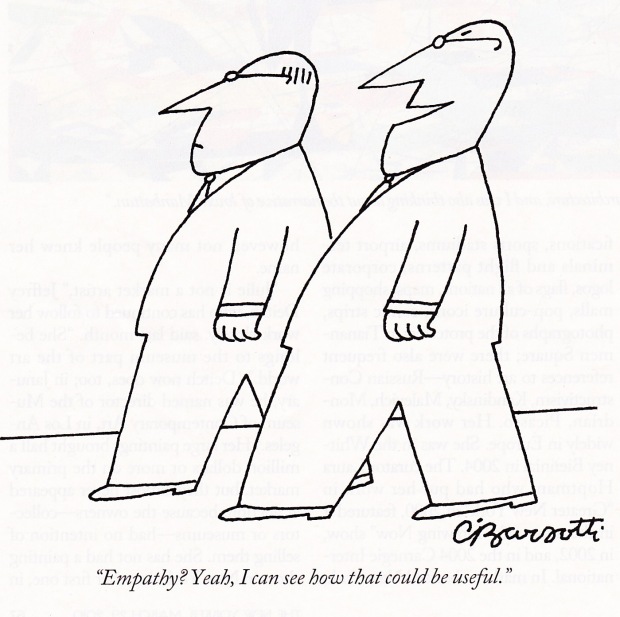 from The New Yorker

Women were given the gift of mandatory transvaginal probes (which meet the definition of forcible rape in many states) and draconian restrictions on abortion providers. Women have also seen cuts to the WIC, SNAP and Head Start programs that their families depend on for luxuries like food and child care.

Latinos were promised comprehensive immigration reform. Instead, they got an about-face from Marco Rubio on his own immigration reform bill, and a lot of nasty talk about “amnesty” and “fences”. Latinos and African-Americans were targeted by laws to prevent (statistically non-existent) “voter fraud” in red states from Texas to Ohio, North Carolina to Wisconsin, Pennsylvania to Florida. Early voting days and hours have been reduced, new voter identification requirements put in place. The Justice Dept is investigating these voter suppression attempts, some of which have already been stopped in the courts.

We gays have never been promised anything by the GOP, except unrelenting hostility to the notion of equal rights. And they send lousy wedding gifts. Witness last week’s freakout in Utah. As far as younger voters are concerned, GOP opposition to raising the minimum wage, balking at fixing the student loan crisis, blocking every job-creation bill, and its curmudgeonly attitudes tell that story. Most people born during or after the Reagan administration have vastly relaxed attitudes about race, gender and sexual orientation. Ruh-roh. Oh, and get this: they’ve even managed to pick a fight with – wait for it – His Holiness The Pope. Wow. I mean, the guy is freakin’ infallible. Do you think he cares what Rush and The Donald and Paul Ryan think about him?

Finally, the unrelenting obsession of the House of Boehner to “repeal Obamacare!” is inexplicable – given that their fifty attempts were dead-on-arrival in the Senate, nevermind Obama’s veto pen. And now that the Obamacare “DISASTER!!” has given way to some really stunning success – with six million people enrolled in new health care plans, and more each month – GOP has positioned itself as the sworn enemy of an increasingly popular and extraordinarily beneficial program. It is the cliché definition of insanity: Do the same thing over and over while expecting a different result.

So, are Republicans insane? The more likely diagnosis is political schizophrenia. The Grand Old Party is split like an old pair of grandpa’s trousers. “Traditional” or “mainstream” Republicans are in the party’s minority – and seem to have lost ground since 2012. The Tea Party / Teabagger / Teavangelical / RWNJ (right-wing nut job) half (3/4) of the party has been in the ascendancy since the 2010 midterm elections gave them a stranglehold on Congress. They don’t have enough votes to pass anything, but they can obstruct almost everything. And they have. You may have heard…

You may also have heard that 2014 is an important election year. The next six months are going to be fraught with what some are calling a Republican “civil war”. Establishment Republicans are being “primaried” by the ultra-right-wingnuts. Remember Senator “I am not a witch” O’Donnell of Delaware? Or Senator “rape is something god intended” Mourdock of Indiana? How about Senator “legitimate rape” Akin of Missouri? Well, the GOP’s Class of 2014 is shaping up to be another bottomless pit of moronic bigotry and ignorance. Stay tuned. And pass the popcorn.

NBC News recently released the above tidbit of exit polling from the 2012 national election. It shows the harsh electoral reality the GOP has been up against and continues to face: the “empathy gap”. Romney had healthy margins of voters who preferred his vision, values and leadership. (C’mon! Seriously?) But Obama was re-elected because he won the overwhelming majority of people who want their president to care about them. That’s empathy. Barack “Trayvon could have been my son. He could have been me” Obama (like Bill “I feel your pain” Clinton) is swaddled in it. But it is a quality that seems to elude the GOP as a whole. (Or a-hole, to be more accurate.)

You’ll hear talk about the Republican effort to “rebrand the party” as a kinder, gentler place for women, blacks, gays, Latinos, 20-somethings, the poor, etc. And then you’ll likely hear laughter – because these old, white men really don’t have the slightest idea how to be relevant to the human condition in the 21st century.

Which is why the elders of the Republican Party have hired consultants to teach their 2014 candidates how to talk to women. No, I’m not making this up. Just Google “how to talk to women”. Go ahead, I’ll wait. OK, did you see the part about “connecting with women on an emotional level”? Uh-huh.

Honey, while you’re making more popcorn, how about bringing us a few beers?

Seems like a good place to remind ourselves that the six Walton heirs have personal wealth exceeding the combined wealth of almost half of all Americans.

And if you haven’t shared this with your fellow 99.999%ers lately, there’s never a bad time:

A video anthology of #GOPcruelty and obstruction :: The Political Carnival.

There are enough votes in Congress to pass legislation in these areas with broad bipartisan majorities.

John Boehner – knowing such legislation would pass – refuses to let the House of Representatives vote. The country wants it. The Congress wants it. John Boehner stands in the way of this. He is a ‘majority’ of one. Who is he working for?

Why would poor people want to live longer?